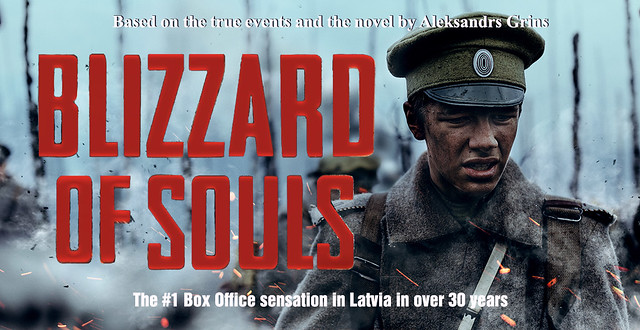 U.S. Audiences can tune into the #1 Box Office success of the past 30 years and one of the most expensive productions of Latvian cinema, Blizzard of Souls / Dvēseļu putenis. The exclusive streaming event will be available from 11 - 29 November 2020 for U.S. audiences.

Enjoyed by over 250,000 cinema attendees in Latvia since its release last November, this impressive adaption of the classical novel by Aleksandrs Grins tells the story of seventeen-year-old Arturs who enlists to fight in First World War with dreams of becoming a hero. After surviving the brutalities of trench warfare and the loss of his family, he wonders if his efforts in battle were futile and if hope is only to be found in rebuilding a family and a home as Latvia itself is born from the atrocities of war. A powerful, visually stunning portrait of lost innocence that has drawn stylistic comparisons to Sam Mendes’ 1917. The film is an unforgettable Latvian perspective on ‘the war to end all wars.’

Blizzard of Souls is directed by Dzintars Dreibergs and filmmakers from around the world were involved in its production, including Emmy Award winning American-born Latvian music composer Lolita Ritmanis and Latvian-born scriptwriter and associate professor at NYU, Boris Frumin.

The film is in Latvian and with English (CC) subtitles. Available for rent until 29 November at www.blizzardofsouls.vhx.tv . After renting, the film is available for unlimited viewing for the next 7 days. Accessible to viewers across the U.S.

This exclusive screening event is organized by the Honorary Consul of Latvia in New York, Daris Delins, as part of the NY Latvian Organization’s celebration for the 102nd anniversary of the Declaration of Independence of the Republic of Latvia on November 18.